Welcome friends, to our first update for 2019!
We hope your year has started well so far.

Jonathan used to regularly have a section in these letters called “Share My Experience’. There haven’t been as many of these lately, but recent events left us feeling we had to share an anecdote about how our family played a part in helping save the rhinos…!!

Jonathan was scheduled for a flight with an overnight on a Monday morning, due back the following day. This was for a Rhino relocation project where he was to fly a conservationist to a neighbouring country to load a couple rhinos on to a truck to relocate to a park in Zambia. Whilst not mission related, such work contributes to endangered animal conservation which Flying Mission deems important. As part of this work, Jonathan also had the opportunity to fly the American Ambassador to visit the park!

Well, as often happens here, things didn’t go as planned. In order to move the rhinos from their home country, a document needed to be signed by a government department. Upon arrival on Monday, it was not ready. So they were told it would be done on the Tuesday morning and all would continue as planned. However by Tuesday afternoon Jonathan and the conservation staff were still waiting… Time ticked on and it soon became clear nothing was going to happen that day! The paper was promised the next morning at 10am. Sonia was called with the bad news. “See you tomorrow” Jonathan told her. So, Wednesday came… the paper still hadn’t arrived by 10am that day either. Jonathan again called Sonia. “If it doesn’t arrive by early afternoon, we may not be back again tonight…”. Later another call.. “Well, the paper arrived, and there is still time to get the rhinos on the truck and through the border before it closes, but we’re not sure we can fly back to Lusaka before dark… sorry, might be another night…” That day Jonathan helped load the rhinos into the trucks, and the conservationist and other personnel such as park staff and vets, were able to get through the border and back into Zambia. At this point a special unit of the Department of National Parks armed with rifles jumped on the truck to safely accompany the rhinos for their ride through Zambia to the park. So, Jonathan was finally back in country, however, there was not enough daylight hours to fly back. Another call to Sonia “So, Im in Zambia…. but……I’ll be back tomorrow”. By now Sonia had almost depleted her supply of single use freezer meals stored for her to heat quickly when Jonathan overnights. “OK” said Sonia “Well, Judah, its just us two…again”. 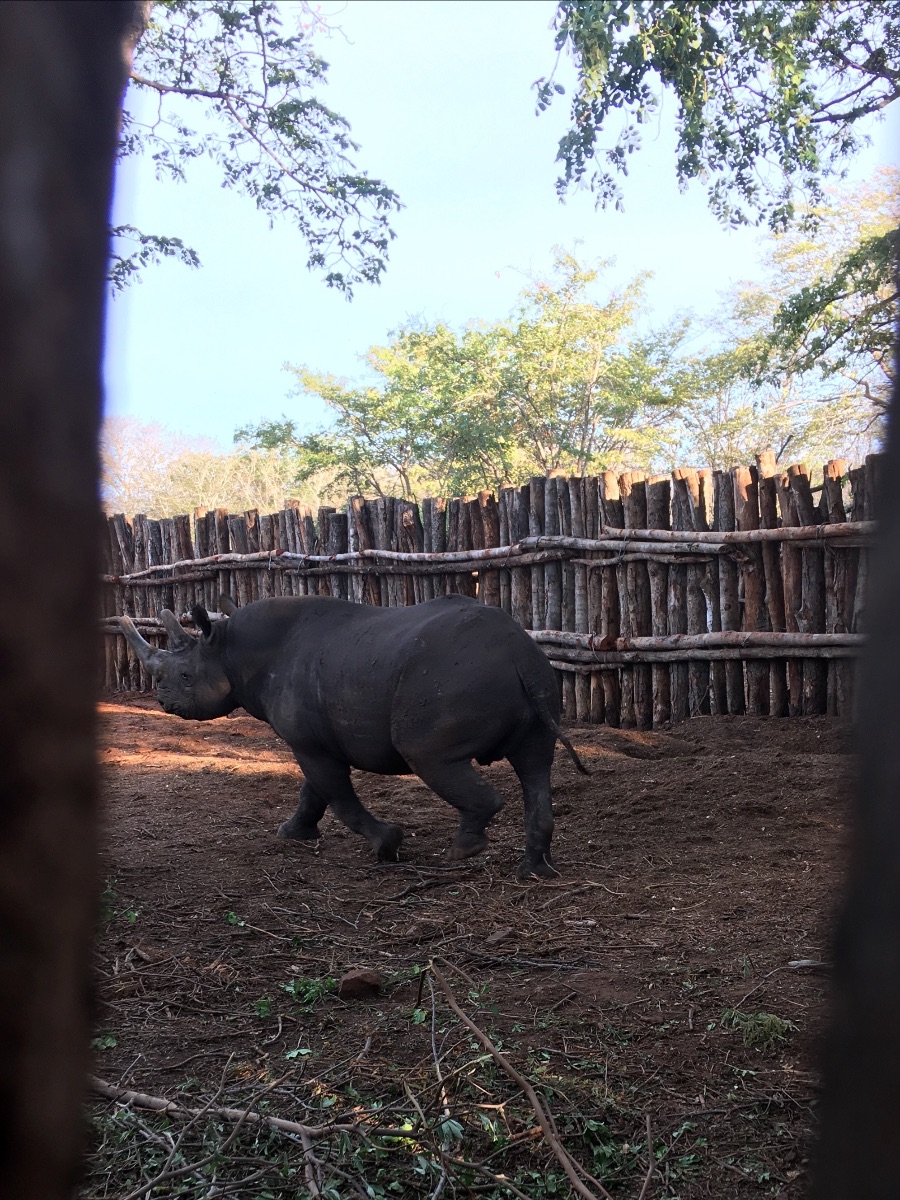 The Rhino in his pen before being moved. 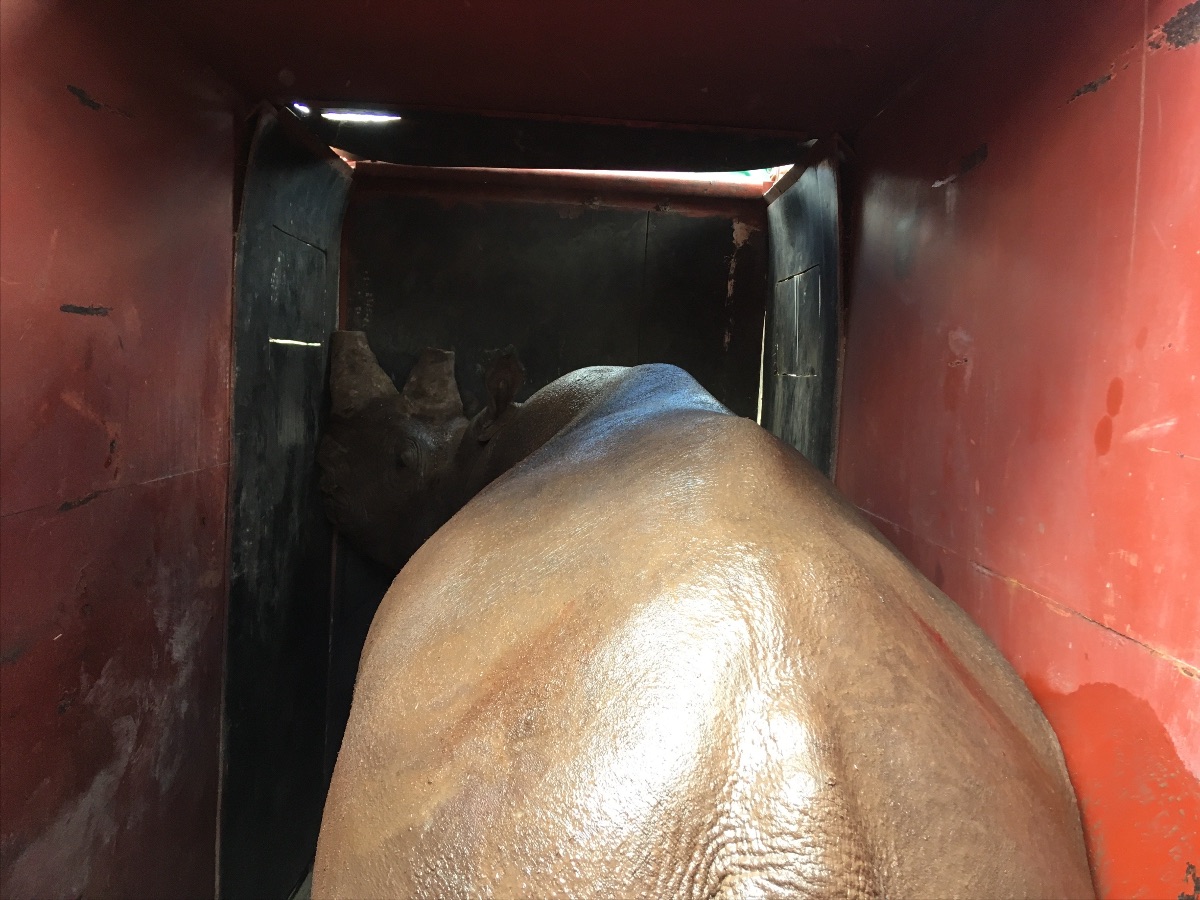 Now loaded into the crate he was transported in. 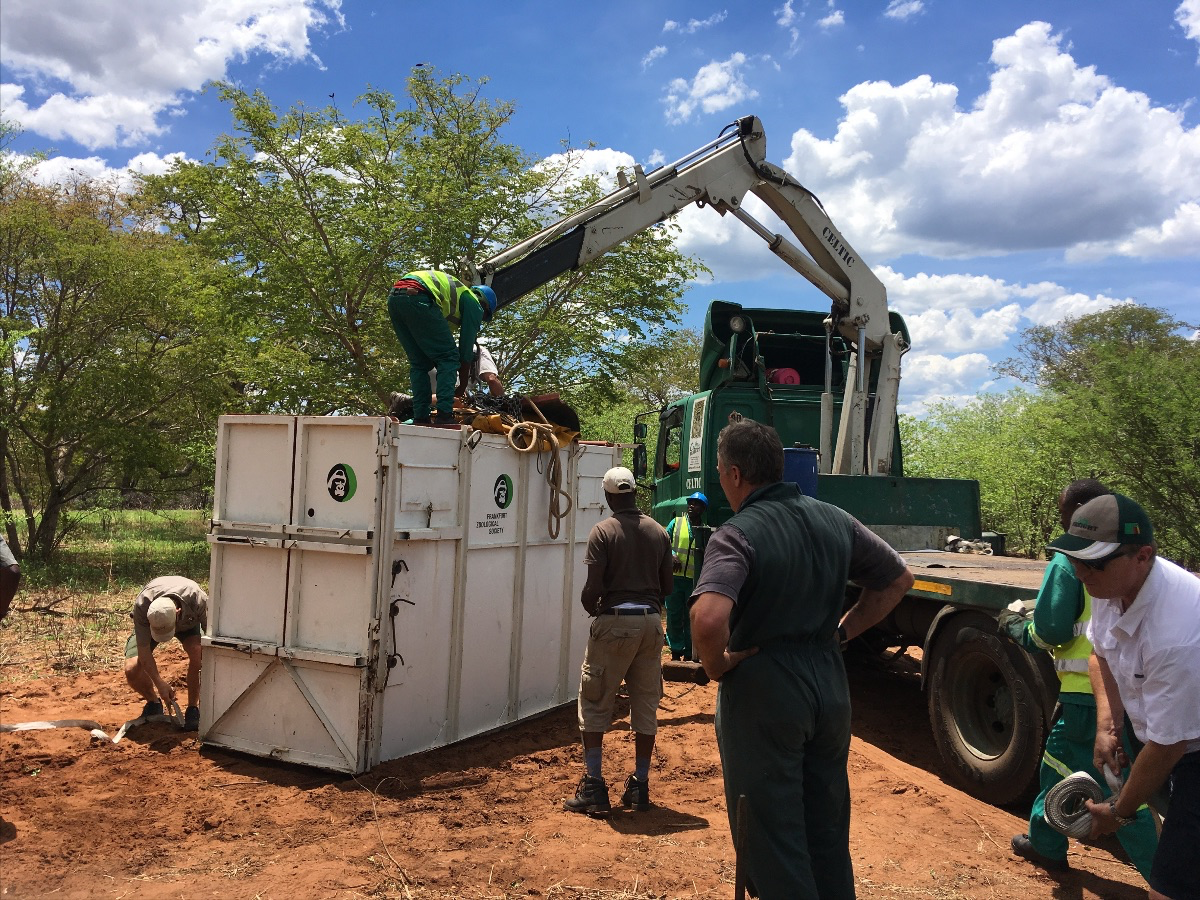 There was also another change as Jonathan was now not arriving back till Thursday late morning but was supposed be on another flight Thursday early morning until Saturday. “I wont be home in time for that flight so I wont have to go away for those two nights”  Jonathan informed Sonia. “Yay” was her reply. “But, wait” said Jonathan “I will only be home on Thursday morning to change, then I have to fly the conservationist back to his park, ahead of the Rhino arrival and stay there to bring others back the next day”.. “Oh, man” thought Sonia. ‘That’s a whole week doing this alone.. Im not sure I can keep doing this… This is hard. Lord please give me strength and equip me here. These are the times I really miss having family to help out”. Not having Daddy around also seemed to be messing with Judah’s sleep, as he was waking again during the night and struggling with day naps.

Jonathan finally arrived Thursday morning, came home for 15 minutes, changed his clothes, repacked his overnight bag (with more than one nights supplies just in case), and was off again. “Im really hoping to be back Friday” Jonathan said as he left.

Well, Friday afternoon came and Jonny landed back at our base, but there was more news. “I’ll stay home tonight, fly to the park tomorrow, pick more people up and fly back to base Saturday evening, stay at home Saturday night then fly again Sunday and be back Monday… the Vets need to monitor the rhino more, then I have to fly them back to the starting point again… ”

So, Sonia and Judah had Jonathan back for about 12 hours on Friday night and the same again Saturday night. He finally returned home for good Monday afternoon. From the previous Monday until the following Monday evening, Jonny had spent all of about 24 hours at home. Much of which was sleeping overnight! We got through it.. but what a week.. !! Jonathan eventually had some time off the next week to enjoy family time together… and give Sonia some rest!

We certainly felt that the whole Weaver family did our part to help save the rhinos that week! 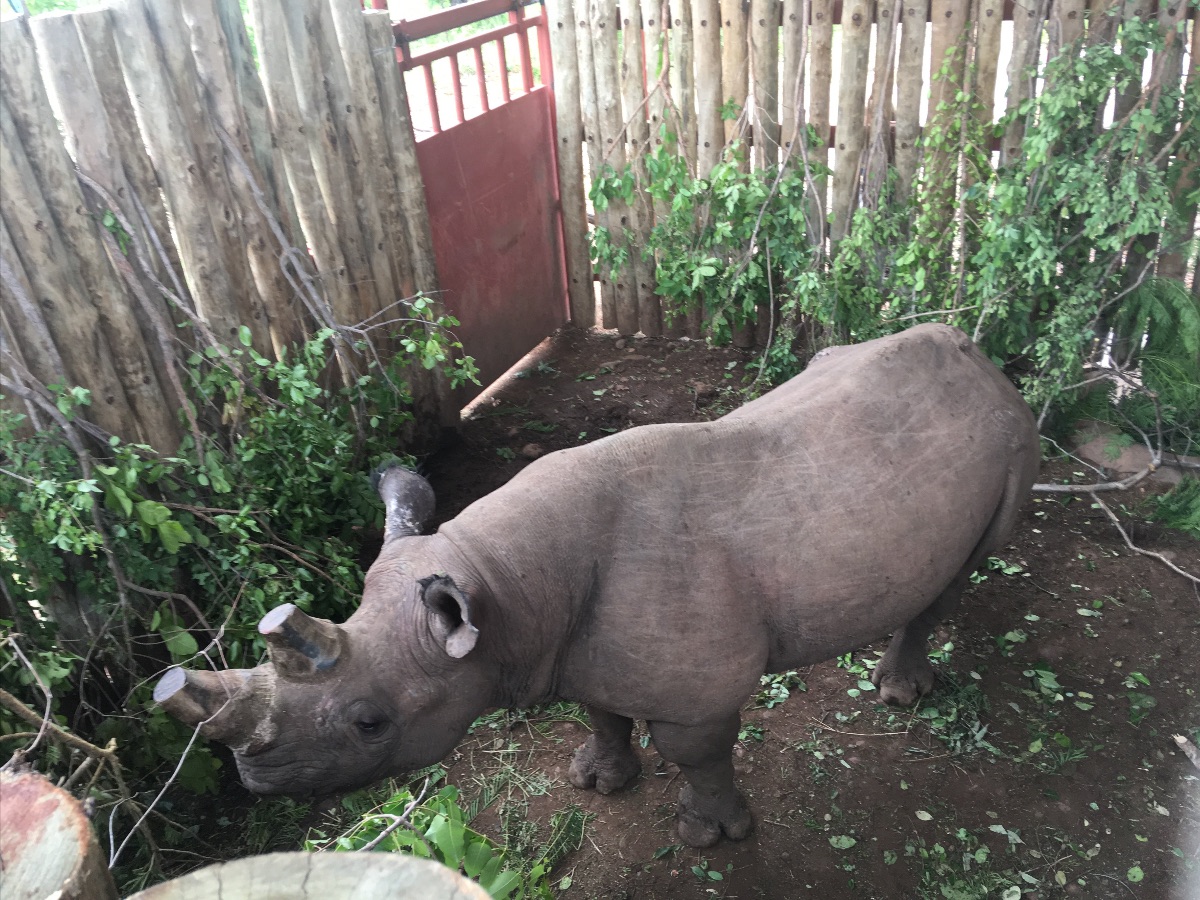 In his new pen awaiting release into the wild once he has settled in.

Aside from this event, we have been blessed in two ways. The previous Maintenance Manager, Joel returned to Zambia with an apprentice to help with hangar maintenance for a whole month. Jonathan was grateful for the extra hands. Jonathan has also handed over the Maintenance Manager role, but will still see to the completion of some projects he had already started, and will continue some aspects of the role so the new Maintenance manager does not have so much on his plate. There are still only two maintenance personnel. The flying also remains quite busy, with a pilot on furlough and another leaving soon. This will again leave three pilots (two of them being maintenance people!!)

We were also blessed by a short term missionary, Kathryn, who came to visit her parents here. She really wanted to help us out and looked after Judah a couple of times so we could have an afternoon to ourselves one day, and a date night. This was only the second time we have had a date since we returned to Zambia last August!! We are so thankful for these people!

Judah is almost 8 months and is a happy guy who loves eating solids, has his first tooth, and will be crawling anytime now. He gets really excited watching planes come and go and when the tractor mows the runway!

With love, the Weavers 🙂 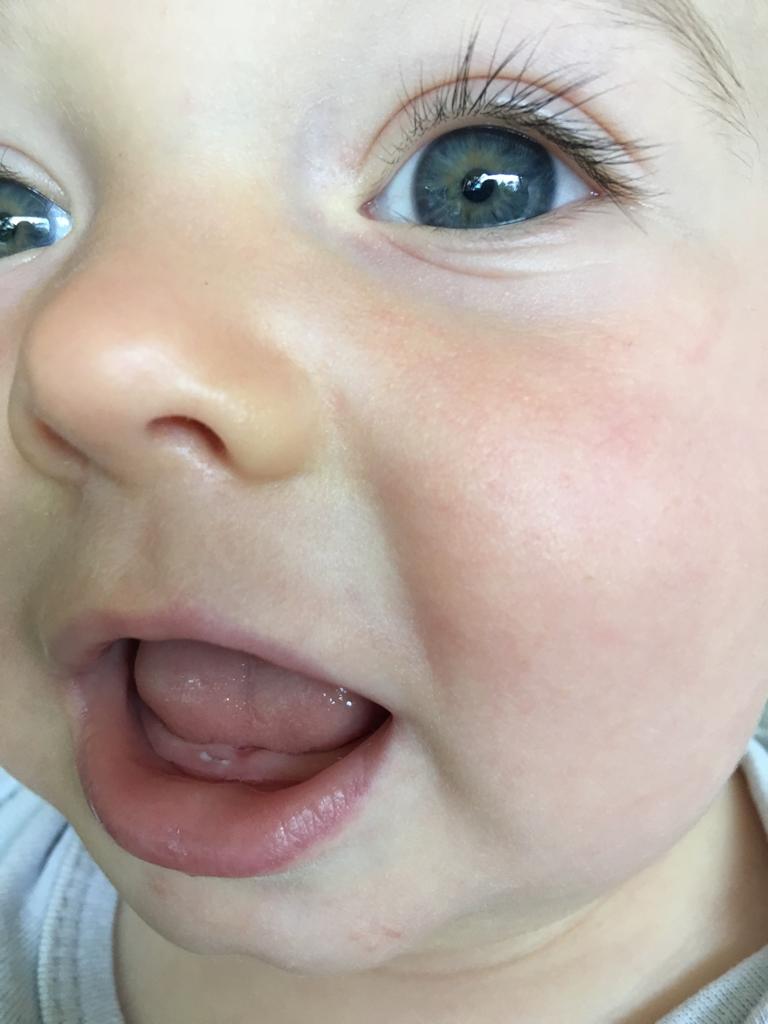 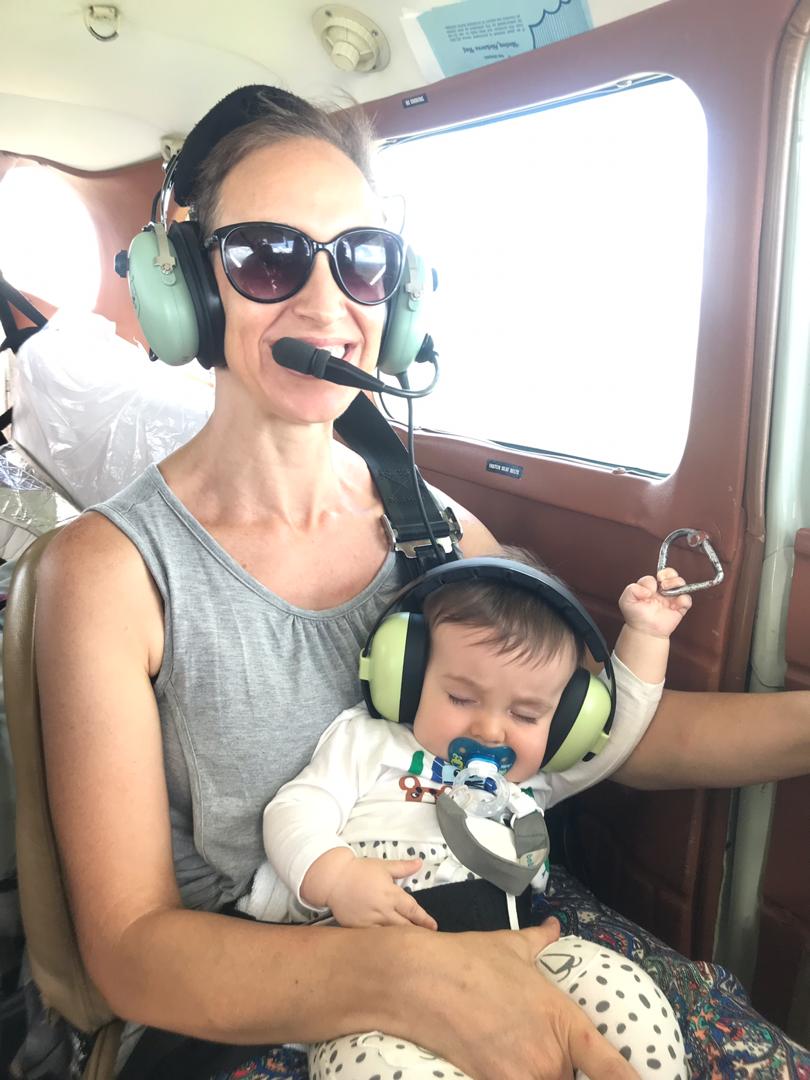